Local Councillor Martin Tiedemann has welcomed the response from the Mayor of London Boris Johnson to his December letter calling for junctions and pedestrian on Brixton Hill to be improved.

As Cllr Tiedemann’s letter set out, the junctions with Brixton Water Lane/Trent Road and with Josephine Avenue were listed by the Mayor’s office as among the 100 requiring improvement but the Mayor has only allocated funding to 33 of those junctions. Cllr Tiedemann wrote to Boris Johnson and local Assembly Member Val Shawcross CBE asking for funding to be allocated to Brixton Hill to address road safety issues.

“I am happy to confirm that Brixton Hill’s junctions with both Trent Road and Josephine Avenue will be improved under these [Quietways, Superhighways and TLRN] programmes and that the Josephine Avenue junction will form part of a proposed Quietway route. The preliminary design stage will start in 2015. I understand that additional crossing facilities near Lambeth College will be considered as part of this work. We aim to complete by 2016.”

Cllr Tiedemann said, “I welcome this response by the Mayor of London and am glad that a timetable has been set for the needed improvements to this area. Now the Mayor should ensure that a timetable is set for all 100 dangerous junctions across London – not just the initial 33.”

Brixton Hill’s councillors are also relieved that box junctions and other lines have also been repainted following the resurfacing work. Cllr Tiedemann said, “It’s unacceptable that cyclists and motorists had to put up so long with no proper road markings on the A23 that added to the problems of already dangerous junctions. Thanks to Val Shawcross AM’s intervention, we are glad these have finally been reinstated.” 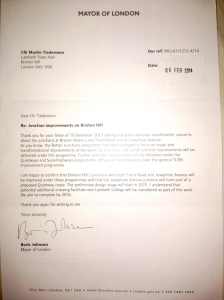