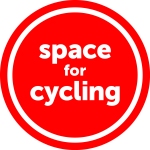 Thank you to all those who have emailed Brixton Hill’s Labour team in support of the London Cycling Campaign’s initiative, Space for Cycling.

Brixton Hill councillor Martin Tiedemann is himself a cyclist and member of London Cycling Campaign and, as Co-Chair of the Labour Environment Campaign, has coordinated the Labour for Cycling initiative. He rode with other Lambeth activists in last September’s #space4cycling bike ride around Westminster whilst MPs debated cycle safety.

Lambeth Labour welcome the excellent work that the London Cycling Campaign has done in helping coordinate some of the priorities of cyclists in Lambeth. We have compiled a complete list of those priorities by ward across the borough and are going through them as one complete list, although the ending of rat runs and safer roads has been a priority for Brixton Hill’s councillors – as shown by the work to Baytree Road and resisting requests to remove the barrier on Strathleven Road.

In the meantime, we’re already the third most popular borough for cycling and have made a Labour manifesto commitment to make Lambeth the most cycling friendly borough in London. We want as many people as possible to get involved and are determined to ensure that their journeys are swift, safe and secure.

There will always be more that we can do and we’ll always only be able to achieve real success with the help of our residents who cycle or are interested in getting involved. We are also keen that where solutions to make cycling safer and easier may prove controversial for other local residents, that LCC play their role alongside councillors and Council officers in finding compromise.

Please do continue to email your Labour team at action.space4cycling.org to make the case for cycling in Brixton Hill.

1 thought on “Response to Space for Cycling campaign”