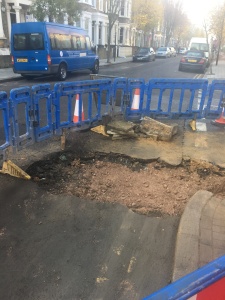 Last Friday, Councillor Martin Tiedemann was one of several local residents to report a major leak on Lambert Road at the corner with Bonham Road. Thames Water responded to say it was aware of the leak and it would be attended shortly.

By Saturday, there appeared to have been no action and large holes had appeared in the road surface. Lambert Road is on the London Cycle Network and heavily used by cyclists, so water-filled potholes are especially dangerous. Water was streaming down both Lambert and Bonham Roads and even down along Brixton Hill. Cllr Tiedemann continued to press Thames Water to take action, to keep residents informed and to screen off the dangerous road surface. He contacted Lambeth Council’s out-of-hours team and the emergency services as well.

We are pleased therefore that on Monday morning action has finally commenced. The leak has been stopped and protective fencing has been placed around the works. Work is due to be completed by 9th December.

It is particularly frustrating that Thames Water can’t keep residents informed during these events. Given it is a monopoly supplier and operates mostly by electronic billing, it must have email addresses for a majority of its customers and could easily let locals know what is happening.

This is the latest in a series of leaks across the Brixton Hill area, including a leak on Arodene Road that left water streaming down the hill for almost two weeks. In the current sub-zero temperatures overnight, these leaks can quickly become hazardous patches of ice. Councillor Adrian Garden was out at the weekend as a local snow warden gritting dangerous patches on local roads.

Councillors are now seeking assurances from Thames Water that they are looking at the wider situation across the area and will keep residents informed about any major works that might be necessary.