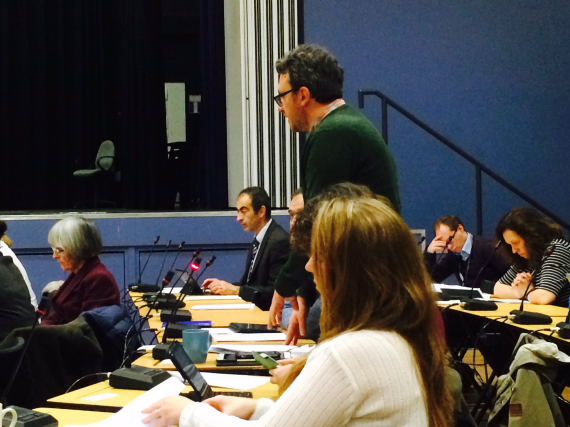 At last week’s full Council, Cllr Martin Tiedemann was able to put down a written question concerning road safety in Brixton Hill. He addressed enforcement of 20mph, rat runs and speeding through the area and unsafe pedestrian crossings, especially the zebra crossing on Kings Avenue. The cabinet member gave a comprehensive response.

At the meeting, Martin was able to follow this up with an oral question, where he raised the New Park Road safety scheme. Cllr Tiedemann thanked the Council for completing the scheme and asked for monitoring to ensure it was doing its job and ensuring safety for residents and the pupils of Richard Atkins Primary School. Cllr Brathwaite was able to assure us that monitoring is indeed taking place and results would be shared soon.

To: Cabinet Member for Environment and Transport – Councillor Jennifer Brathwaite

Many Brixton Hill residents have written to us concerned by rat running and speeding traffic along residential roads in the area. Can the Cabinet Member please outline how we will ensure the borough wide 20mph limit is observed, how we can address concerns in roads such as Dumbarton, Lyham and Kildoran Roads about road safety, and what plans she has to address serious concerns about the zebra crossing on King’s Avenue that residents report cars routinely ignore?

Answer: Lambeth’s borough-wide 20mph speed limit came into force on 4 April 2016. In order to assess the impact of the speed limit change the Council will be undertaking speed and volume counts on 360 roads in the borough in the final 2 weeks of January 2017, including Dumbarton, Lyham and Kildoran Roads. A similar survey took place in January 2015, prior to the introduction of the 20mph limit.

The data collected as part of this survey work will provide a key part of the evidence base to determine how the future budget for traffic calming schemes will be apportioned.

Speed enforcement is the responsibility of the Police. However, Lambeth is working with the Police in order to ensure that a level of speed enforcement does take place in the borough. In addition, Transport for London and the Metropolitan Police have launched Community Roadwatch in Lambeth; this is an enforcement programme working with residents to reduce speeding in residential areas – https://tfl.gov.uk/corporate/safety-and-security/road-safety/community-roadwatch. One such event, which took place on Lyham Road on 23 November 2016, was led by the Lambeth Safer Transport team.

There are proposals in place to address the concern about the existing zebra crossing on Kings Avenue, between Clarence Avenue and Rosebury Road, as part of the Our Streets (NEP) programme. The proposed changes include the raising of this existing zebra crossing to create an improved facility that encourages vehicles to slow in this location and increase the level of priority afforded to pedestrians. The statutory (formal) consultation in relation to the changes is scheduled to commence on 18 January 2017.