A road closure notice has been published seeking the closure of Upper Tulse Hill at the Brixton Hill end on several days over the next eighteen months to allow investigatory water works. 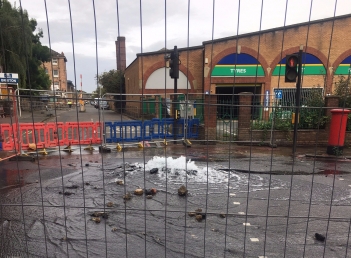 A burst water pipe this morning at 04.50am has caused major disruption and could potentially mean that Brixton Hill is closed until after the weekend. This has now been found to be a 12-inch pipe rather than an 18-inch water main, but the volume of water this morning saw Brixton Hill become a torrent and streams of people walking from Streatham to Brixton as buses were caught up in the jam.

Below is an update on the event and the action that Thames Water is taking:

Councillors have stressed that permanent traffic diversions cannot lead to further burden to existing rat runs such as Dumbarton and Lyham Road. We have also made clear that Thames Water need to do more to reduce the number and impact of burst pipes in Streatham and Brixton Hill. Today there have also burst pipes in Leigham Vale and St Julian’s Farm Road. This level of disruption is unacceptable and Thames Water need to address this urgently.

If residents have any queries please call Thames Water on 0800 3169800, quoting your address.  Lines are open 24 hours a day.  They are also available via Facebook or Twitter.

A planning application has been made for the former Toyota garage at 237 Brixton Hill by the bus depot.

The plans consist of the demolition of the existing building on site and erection of a four-storey building comprising commercial floorspace on part of ground floor and basement level and provision of 10 self-contained residential units.

As your local councillors, our initial thought is that this development could be too large for this site and out of keeping, and we are concerned by the lack of affordable housing in the development. But we want to know what residents think and to remind neighbours of the opportunity to tell the Council direct. END_OF_DOCUMENT_TOKEN_TO_BE_REPLACED

Following a review instigated by Lambeth Council Trading Standards, the Licensing Sub-Committee has agreed to put new conditions on the Kwik-Stop Food & Wine at 72 Brixton Hill that mean it will no longer be able to sell alcohol overnight.

The latest review was instigated following the discovery of an alleged illegal worker in the shop. The apparent employment of the same man at nearby Costcutters (which has the same owners) led to that shop having its hours reduced earlier this year. A previous review of Kwik Stop in 2015 imposed new conditions that did not appear to have been stuck to since then. Both the Police and the Council in their submissions linked the low sales associated with opening overnight with the move to employ illegal workers. Local residents also made submissions, some in support of the shop but more stating that the off licence contributed to nuisance, noise and street drinking.

After hearing the submissions and making its deliberations, the Licensing Sub-Committe decided:

The premises have until late July to appeal this decision.